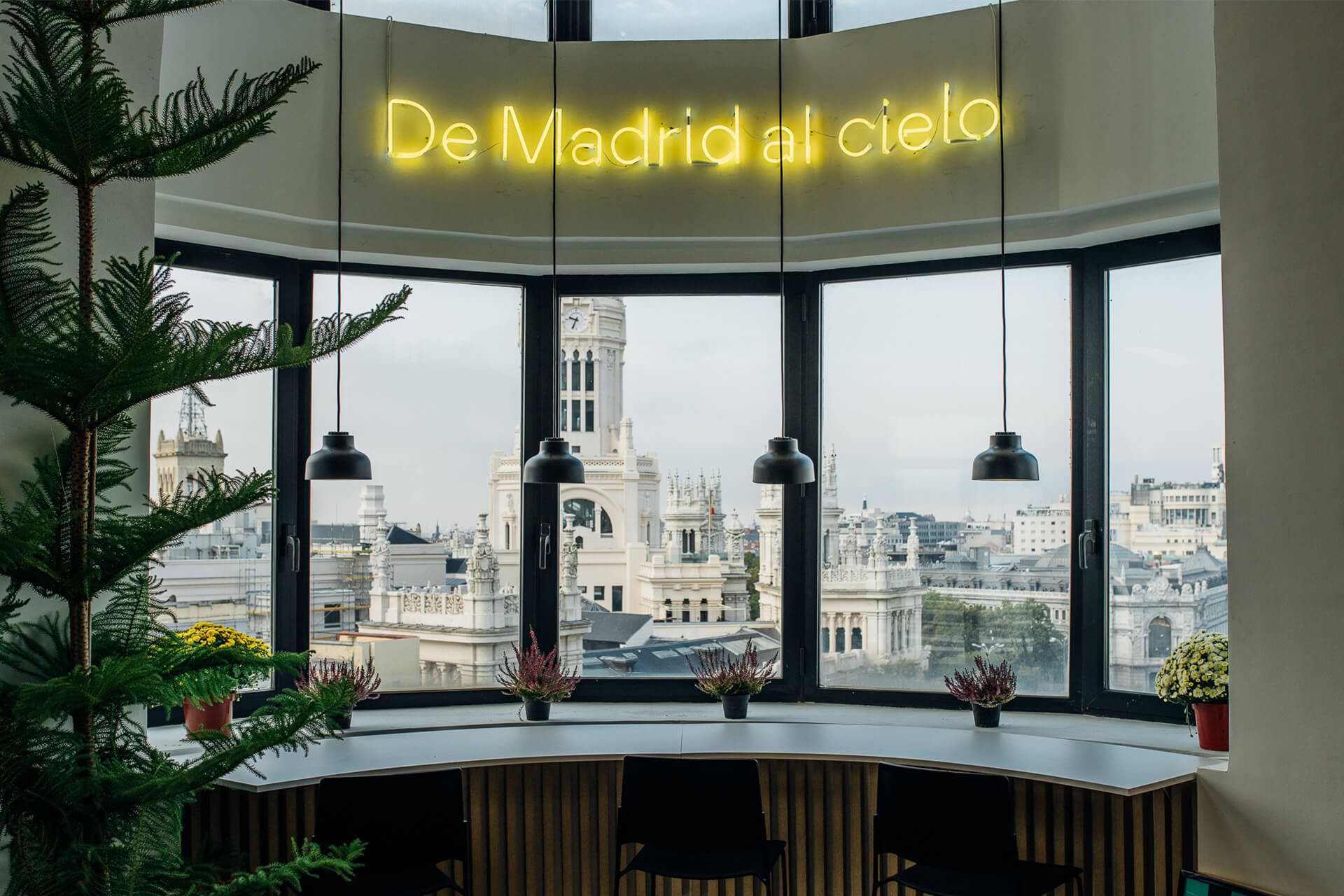 After a few months in Madrid, we have decided to build a list of the most unique and special places for us in this incredible city.

Cloudworks was born in the heart of Barcelona in 2015, but on May 1th of this year we had the opportunity to open our horizons and move to Madrid to open a new coworking space: Cloudworks Cibeles. From there we have our small, but emblematic, Madrid headquarters where our coworkers build synergies, work hard in the office and enjoy unique experiences that we offer them in this space week after week.

After a few months in Madrid, we have decided to build a list of the most unique and special places for us in this incredible city. This is our selection and, although we have chosen only 10 locations, we will surely fall short because most places in the capital are incredible.

We dare to say that Madrid’s Plaza Mayor is fascinating. It was built during the 16th century by Juan de Herrera and Juan Gómez, but the last modification of the place was in 1790 and, since then, its structure has not been modified. Throughout history it has had many names, such as the Plaza Real or the Constitution, but no matter what it is called it has always been a place of parties and good food, thanks to the restaurants that surround it. The square is 129 metres long by 94 metres wide, surrounded by three-storey buildings with porches throughout the square.

Although it may seem like a normal space during the year, when the Christmas holidays are approaching everything is magical. Every Christmas, for almost 150 years, the Plaza Mayor has hosted a traditional Christmas market full of decorations, costumes and items for the little ones. This particular event attracts masses of tourists and neighborhood residents who fluctuate in a very special atmosphere.

After to the Louvre, it is one of the largest museums in the world.  It is the art museum of excellence that houses the richest and most complete collection of Spanish art. At the same time we can also discover masterpieces from other schools of European painting, especially Italian and Flemish art. The building was first designed in 1785 by the architect Juan de Villanueva and was used as a natural science centre before becoming the museum it is today. Take the pleasure of getting lost in Museo del Prado and its enormous corridors to glimpse at paintings by Goya or Bosch. It is a place where amazing art is found in every corner, and that is something that very few places in the world can say.

If we had to choose a roundabout in Madrid, something that at first seems banal and insignificant, this would be Plaza de la Cibeles. Without a doubt, it is the one that most evokes the splendour of the imperial Madrid. It is surrounded by monuments such as the Prado Museum, mentioned above, and the jewel in the crown: the astonishing Palacio de Comunicaciones. Other emblematic buildings surrounding the perimeter of the square are the Linares Palace and the Casa de América, the Buenavista Palace and the Bank of Spain. In the center presides the spectacular fountain of the goddess Cibeles, which is one of the most beautiful of the capital.

We have the honor, and luck, to say that Cloudworks Cibeles is very close to this square (hence its name) and thus have an incredibly special location.

The district of Salamanca is known internationally for being the Golden Mile: a benchmark of fashion known around the world. It unfolds along Ortega y Gasset Street and its surroundings, where we can find boutiques of great designers from all over the world. It is well worth taking a walk through the shop windows of its haute couture and accessories stores, shoe stores, jewelry stores and luxury watches to be shocked by the prices. Art collectors also find their place in this neighbourhood, which concentrates several art galleries and auction houses around Calle Villanueva.

But not everything is fashion, its streets are home to haute cuisine restaurants that mix with museums and unique spaces where you can share good times.

You can’t visit Madrid without visiting one of the city’s most impressive buildings: the Royal Palace. Although it is the official residence of the Spanish royal family, they do not actually live there permanently and it is only used for state ceremonies. However, the Royal Palace is really a place full of wealth and beauty. It has 3,418 rooms, although only some of the larger ones are open to the public. The rooms are impregnated with paintings by artists such as Caravaggio and Velázquez.

To visit it you can buy the tickets, which are available to everyone, on its Official Website.

Gran Vía is the busiest avenue in the centre of Madrid. It ends to the west at Plaza España and to the east at the intersection with Calle Alcalá. The street is appropriately called “el gran carril”, with quirky Art Nouveau and Art Deco facades in front of its banks, offices and apartments. In the 1920s, Gran Vía became a promenade for its inhabitants, with numerous shops, insurance company offices and leisure buildings combining splendid cinemas and elegant theatres.

Today there are countless things you can do, such as watching street performances, browsing and shopping in its more than 30 shops, going to the cinema, enjoying typical Madrid cuisine or simply admiring its architecture.

Buen Retiro Park is the city’s first large park, and it is just minutes away from Cloudworks Cibeles. It has the shocking size of 1.4 km2 and it is situated in the center of the city. The park belonged to the Spanish monarchy until the late nineteenth century, when it became a public park. It is a magnificent place, full of beautiful sculptures and monuments, galleries, a quiet lake and home to a variety of events. The Palacio de Cristal, next to the lake, is an incredibly beautiful building where temporary exhibitions can be seen. You could say that it is the lung of the Spanish capital, so if you have a couple of hours give yourself the luxury of walking under its large trees.

Did you know that you can visit an authentic Egyptian monument without leaving Madrid? You can find this next to the Paseo del Pintor Rosales (Parque del Oeste) a temple full of history in its stones, with more than two thousand years standing. Coming from the region of Nubia, it was erected in the middle of the desert on a plateau whose inclination looked out over the valley of the Nile. The key moment to visit it is at sunset, since the light affects the monument in a unique and unrepeatable way throughout the day. Do not worry about the entrance, as it is completely free to see it because it is located in a park open to the public.

Having New Years Eve from home with the family is fantastic, but experiencing it in the emblematic Puerta del Sol is priceless! It is the most famous and central square of Madrid, located a stone’s throw from the Plaza Mayor. Originally it was the site of one of the gates of the city, which looked east and was decorated with an image of the sun, hence the name of the square. The place has an almost semicircular shape and owes its current silhouette to the important renovation works carried out between 1854 and 1860. You cannot pass through Madrid and not accidentally stumble over the Osa and the Madroño.

It is the most popular open-air market in Madrid and one of the oldest, as dates back to the fifteenth century. Located in the surroundings of Ribera de Curtidores street, it is an unmissable date on Sunday mornings and public holidays, when more than 1,000 street vendors tempt visitors with a multitude of items: trinkets, second-hand clothes at reduced prices, antiques, handicrafts, books and records, and so on. The market has a unique atmosphere and is a magnet for tourists, who take full advantage of their visit by combining a bit of shopping followed by a drink and the usual tapas. If you want to visit a retro place, do not hesitate to step on its streets of stalls!

The list is now finished! We hope that if you didn’t know some of the emblematic places mentioned, you will be able to visit them the next time you set foot in the city of Madrid. If you live in it and you didn’t know of its existence, – which we doubt – what are you waiting for to visit them!